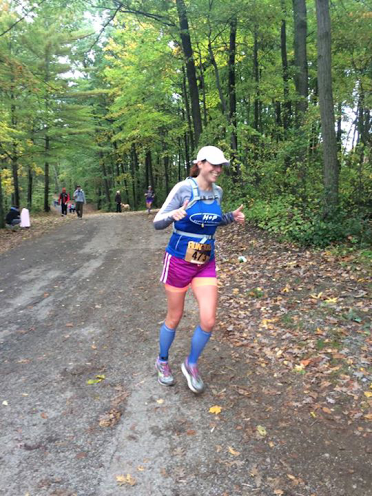 It's been a while!  Time for our fourth episode of H+P Spotlight.  Today we had the chance to chat with Cari.  She's been an outstanding edition to the team ever since she joined.  With her hard work, positive attitude, and outstanding improvement (including taking almost 30 minutes off her ATB time this year!), there's no denying that Cari makes the club a better place for all of her H+P teammates.  Of course, it doesn't hurt that she has brought 3 of the first honourary H+P-ers (her two boys and dog Maggie).

Here's what Cari had to say:

CRH: I was a “hobby runner” for years.  I would sign up for a race to motivate myself, run regularly until the race, and then stop for months and have to start over again. My first ever race was the 5km Run Waterloo EndurRace back in 2004, and my certificate for that one is still not full!  When I was on maternity leave with both my boys, I had a great jogging stroller and ran 2-3x a week, and I did my first two Try-a-Tri races at the end of my mat leaves.  But everything dropped off once I went back to work both times. Even when I previously did Around the Bay and the Scotiabank Waterfront half marathon in 2012, they were more about just doing the distances than racing, and when I didn’t sign up for anything in 2013, I didn’t run!  Joining H+P in early 2014 was part of my commitment to running as a sport, and actually training to get better at it. I’m happier when I’m running!

H+P: You have come a long way in the past 1.5 years, setting massive personal bests at literally every distance you've run.  What accomplishments are you most proud of?

CRH: The personal bests are an amazing feeling. It’s easy to PB over when I wasn’t really training, but seeing improvement over my 5 km times between April and October of last year, even though it’s smaller, feels just as good!  The two that I’m the most proud of are my 5th place age group finish in last year’s Guelph 2 Try-a-Tri, and definitely this year’s Around the Bay.  It felt AMAZING to run the entire 30 kms of Around the Bay, especially passing the sections that I walked through in 2012.

H+P: What types of changes have you made in your training that helped to produce this spike in performance? 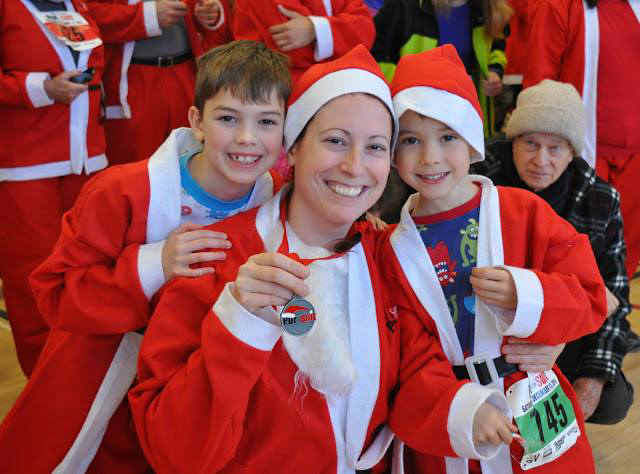 CRH: For the first time ever, I’m actually “training”.  I don’t automatically skip workouts when I get busy.  Instead, I find ways to adjust or move them.  Having a coach tell me what to do makes a big difference, since I would never do intervals or speed work or hills on my own!  It also really helps to have everyone’s experience and expertise to draw on now too. Before I joined H+P, I knew nothing about proper training, had no idea what a “taper” was, or the importance of base mileage.  It’s almost embarrassing to admit how little I knew.

H+P: H+P seems to have a reputation (with some) as being a "high performance" or elite type club.  Were you intimidated to join at all?  How did the process of getting comfortable with the group and training program go?  Were there any major challenges? 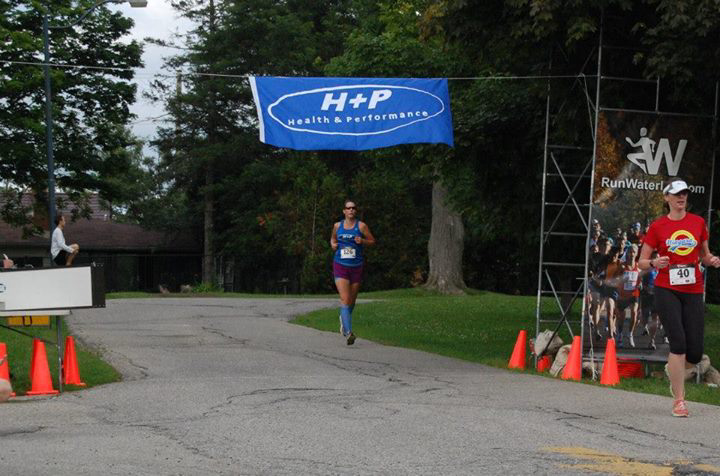 CRH: I was very intimidated at first, but there was no reason to be!  I discovered H+P when I was following a few people on Twitter who turned out to be members.  I loved the philosophy of training to get better and the health benefits will come, and it’s obvious on the website that the group is open to all and welcomes runners of all ability.  But when I looked a little closer, YES, I was super intimidated by all the elite runners!  In fact, I think my first email to Sean said just that: love your attitude, but how can I possibly fit in?  (I think I used the word “slow” a lot in that first message…)  Sean responded with what I’ve come to know is his normal high level of enthusiasm and encouragement: telling me that I would be welcome, it sounded like I’d be a good fit, and to come on out and give it a try!  It took me a little bit to figure out the workouts (I still have to ask questions when Sean describes them‎), but everyone was very welcoming and encouraging right from the start.  There are definitely different degrees of running ability in the group, but no one acts as if they are better than anyone else because of that ability.  Everyone in the group respects everyone else just for showing up and doing their best.  There are lots of options to make the workouts work for you, and there were lots of people who made the effort to circle back and “pick me up” between intervals, etc.  It’s definitely training and it’s hard work, but there’s a surprising amount of fun to be had too.  H+P definitely deserves the “high performance” reputation.  But there’s nothing elite about the group’s attitude!

H+P: What is your favourite part(s) of training with H+P?

CRH: Definitely the social aspect. I’ve met some fantastic people, made some great friends, and get to keep challenging myself to keep up with them!  It’s such a little thing, but it means so much to me to hear everyone encourage each other when we’re running past (or being passed) during workouts. I’d never really considered running to be a “team sport”, but it’s that team feeling that I really like. This winter was tough, but knowing that a whole group of people would be out there working and braving the windy cold with me was really motivating.  It’s great to have people to call up to run with outside of the H+P sessions.  And having someone to laugh with when long runs don’t go according to plan helps too!

H+P: One of the most impressive things about you is not just your improvement, but your improvement given how busy you are in life!  Busy job, kids and countless other responsibilities- how are you able to make everything work?  What advice would you give other parents/over-committed individuals struggling to fit time for fitness?

CRH: I’m laughing at this question, I’m so glad it looks like I’m making everything work!  Life is definitely busy, but part of committing to running for me was committing to not automatically cutting it out when things get stressful. I have my kids 50% of the time and in some ways, that makes it easier for me, since I know I can fit in regular workouts when I don’t have the boys.  But fitting in extra mileage to train for longer distances was harder.  I decided that it was worth budgeting a babysitter once a week to help with that, and I try to schedule playdates for the boys at the same time whenever I can.  Hockey season was tough, getting up to have one (or both!) of them on the ice for 7 a.m. and then squeezing in a long run on my own because I missed the H+P run was tiring, so I also made time for naps!  It really does help to schedule blocks of time during the week for your 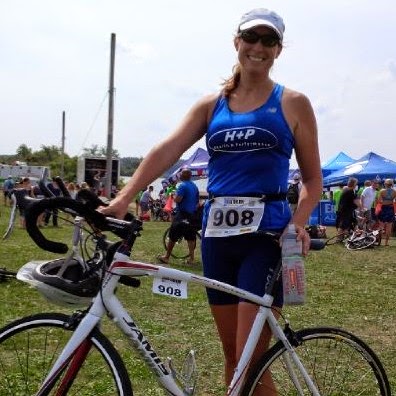 Other strategies: I live only 5 kms away from my office, so I’ll run to work occasionally, or I’ll try to get out for a run at lunch (having a shower at the office helps!)  The boys are too young yet to be left on their own, but I have an elliptical and my bike on a trainer in my basement and can get some cross-training in after they’re in bed or before they’re up in the morning.  Summertime is easier, because I can bring them along to hang out during H+P workouts, and they’re both getting more interested in running (or biking) along with me. I’ll run laps around the soccer field, or do stairs at the hockey arena while they practice.  Doing something is always better than doing nothing, even if “something” is walking up the toboggan hill 20 times while sledding with the kids, instead of doing a hill run.

My biggest piece of advice is something I’m still working on: while it’s important to try to fit in training when and where you can, it’s also important to be kind to yourself.  While I don’t want to cut out running, sometimes there really is too much on my plate, and something has to give.  If I do miss a workout, I try not to beat myself up over it. Similarly, I try not to let it get to me if the dishes sit in the sink, laundry isn’t folded or my house doesn’t get vacuumed because I went for a run instead.  Fitting in fitness isn’t selfish, but I think it’s something women (moms especially) struggle with. Having a supportive partner is priceless.  ‎My boyfriend isn't a runner, but he gets my commitment to training, and would never ask me to skip a run even when things are busy.  Just the opposite: he encourages me to go, and will often have food waiting when I get back!

H+P: What drives you to find the time to continue training?  Is it health, competition, or something else? 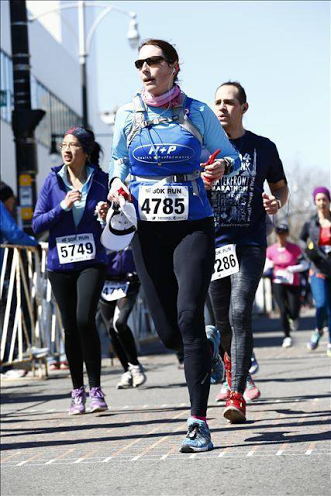 CRH: My kids.  I want to set a good example for them.  We did the Santa PurSuit last year as a family, and I was so proud of them! They’re starting to understand that competition isn’t just about winning and losing, but about pushing yourself to do better.  I think I’m a bit addicted to the PBs, and I’m looking forward to seeing how much I can still improve now that my baseline is a season of training.  (But I’m not going to lie, the fact that my clothes fit better when I’m training is also really motivating!)

CRH: One big goal for 2015 is already behind me: Around the Bay! It was a great race for me, and everything went really well. Of course, now I’m tempted to do it again in 2016 and see how much better I can do.  Other goals for 2015 include a sub-25 minute 5 km, doing my first Sprint Triathlon, and trying to catch a few ladies in the H+P World Ranking!
Posted by Health and Performance at 19:18