The last massive 2013 team-race for Health and Performance was this past weekend in Hamilton at the Road2Hope half and full marathon!  The team showed another ridiculous level of improvement.  If you recall, two weekends ago, a PBPB (personal best personal best) was set in the total number of personal bests achieved.

This past weekend, fewer athletes raced, so it was impossible to achieve a new PBPB.  HOWEVER, we did manage to reach a new personal best DIFFERENTIAL personal best- a PBDPB.  In other words, the sum of the total minutes taken off our previous PB's was the best we have ever seen at one given race.  Great work team! 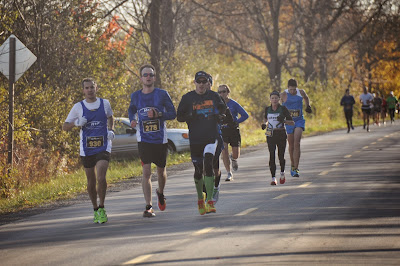 Jordan and Greg hammering away!


Here are the results along with the PBD (personal best differential):

Total PBD for the marathon: 107mins

Lori ran 1:54:58, an amazing result considering some injuries she is facing.  PBD: 5 mins

Mark ran his first half ever on no training- hopefully he can walk today!  PBD: INF

Total PBD for the half marathon: 34mins

Thanks everybody for a great racing season!  We have big plans for next year including; Around the Bay, H+P TT record-breaking attempts, more marathon PB's,  5 and 10K PB's, some cycling races, ENDURrun, multi-sport stuff and more!